skip to main | skip to sidebar

went to Ely's aunty's house recently! omg! it's so big!! very very nicee! hahaa.. went there stayover..omg it was so fun! went swimming at night..hahah scary it was dark! then my sis came over too! hehee.. played squash with ely.. noob! we simply hit only..hahaha it was damn fun! we were laughing like mad.. then when i serve..the ball went up high and got stuck on the netting up there.. ahhaha.. it was so funny! and it cant come down.. so ely's sister and her sister's fren try to hit it down with another ball but it went in aswell! ahahha.. super funny!! then went back my house to get more squash balls! ahhahahahaa played again in the morning.. then one more went in! wht ler.. hahaha.. they should put a net thingy there.. so, we dint dare to play again..after go in AGAIN.. so.. we went at the back of the pool and saw one very long stick! took that to take the balls down.. aahhaha.. got it back!! then went swimming.. ahahha.. sucked and drank damn alot of water.. lols..! it was fun and less scary! hahahahaha!! 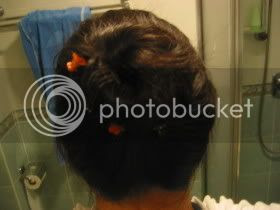 * i was jobless that night!! ahahaa 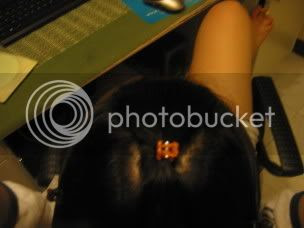 * do u see the orange thingy on my head!! ahahhahahaha!! funny!!

* me and ely in her aunty's guess room!